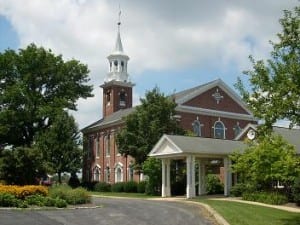 By the time John Diffenderfer arrived in Philadelphia from the Palatinate region of Europe (modern western Germany) in 1727, William Penn’s invitation to those seeking religious freedom was already a few decades old. Nevertheless, by 1728 Diffenderfer and his family settled in the wooded countryside, near what would become New Holland, Lancaster County.

Other German farmers that followed Diffenderfer were spread thinly across the countryside of northern Lancaster County. When the county was created in 1729, from a slice of Chester County, the area around present-day New Holland, was named Earl Township.

Like Lititz and Ephrata and other towns in Lancaster County, many of the settlers who established New Holland had suffered from religious persecution in Europe. America had been advertised in Europe as a place where many freedoms were available but, in particular, New Holland’s settlers established churches. The imprint of their religious convictions still is evident in the number of churches that survive within the town’s boundaries.

Within a few years of the Diffenderfer family’s arrival, the town was the largest settlement in Earl Township and was often called Earltown. But it would have several other names before 1802 when the post office was established and residents settled on “New Holland” to honor the benevolence of people in Holland who offered assistance to the town’s settlers when they passed through Rotterdam on their way to the New World.

New Holland is surrounded by farmland but, in the early 1700s it was lush with verdure in the form of virgin forests of ash, oak, walnut and chestnut trees. Diffenderfer settled on a square mile of land just north of the present-day town and set about building a life in agriculture. It wasn’t until 1750 that Diffenderfer’s son Michael laid out a plan for a town he called New Design.

The plan drew upon a European style of development that is still evident today. The linear design placed settlements along a high ridge, which modern Route 23 follows. Houses lined both sides of the main street and each house was allotted a plot of land that was cultivated or used as a livestock pasture. One of New Holland’s other names, “Saeue Schwam,” meaning Hog Swamp, was derived when one area farmer used his plot, a low-lying swampy area, to graze pigs. The area became known as Hog’s Swamp.

From its inception, the rich soil of the surrounding countryside and the ample space for grazing livestock rooted New Holland’s economy in agriculture. New Holland’s Sales Stables, for example, is a livestock auction and one of the oldest agricultural traditions, where animals are sold to the highest bidder every Monday, Wednesday, Thursday and occasional Fridays. It is one of the largest livestock auctions east of the Mississippi River, selling about 10,000 heads a week. Established in the early 1900s and located just south of Route 23, sheep, lambs, dairy cows, beef cattle, goats, hogs and Percheron and Belgian field horses are sold.

The sales stables attract visitors, buyers and sellers from all walks of life. In 1980, then-presidential hopeful Ronald Reagan campaigned at the auction. In 1996, working-class hero and rock star Bruce Springsteen visited to buy feed cattle for his New Jersey farm.

New Holland’s agricultural heritage also is responsible for making the town’s name known around the world for its farm equipment. Abe Zimmerman, a 26-year-old village tradesman in 1895, opened a machine repair shop. Zimmerman’s New Holland Machine Shop introduced a portable feed mill in 1899 and went on to produce other farm equipment innovations aimed at reducing a farmer’s labor. Throughout the 20th century, New Holland Machine Shop was purchased by several companies such as Sperry-Rand and Ford.

Today, it is known as Case-New Holland, the second-largest manufacturer of agricultural equipment in the world with more than 10,000 dealers in 160 countries.

New Holland also celebrates its agricultural tradition the first week of every October at the New Holland Farmers Fair. Since 1927, the town fair has featured a slice of real hometown Americana with funnel cakes, barbecue, horseshoes and other simple pleasures. There also are exhibitions of arts and crafts, fruits, vegetables, wine, photos, needlework and quilting.

Part of New Holland’s small town charm is in its quaint traditions, like its community band, one of the oldest in the country. Ironically, the band has earned the tiny village world acclaim. Established in 1829, the band has been in continuous performance since 1856 and has played at the Eiffel Tower in Paris, Washington D.C., for then-President Abraham Lincoln, and many other venues in the Northeast.

Community bands, like New Holland’s, are rooted in European traditions that were brought to America by German-speaking immigrants. Often, community bands were formed to provide a musical backdrop at town religious and secular events and holidays, such as picnics, festivals, the Fourth of July or Decoration (Memorial) Day.

But many bands also were rooted in military tradition, providing marching music for troops. (The New Holland Band mobilized for military service and was known as the 203rd Regimental Band of the Pennsylvania Volunteers during the Civil War.)

Today, the band plays an annual concert series from May to December and special events that keep it performing all year. New Holland also celebrates its band with a museum on the second floor of the Eastern Lancaster County Library, off Route 23. Featuring more than 150 instruments, the museum has a unique collection of uniforms and artifacts from the late 19th-century band leader John Phillip Sousa.